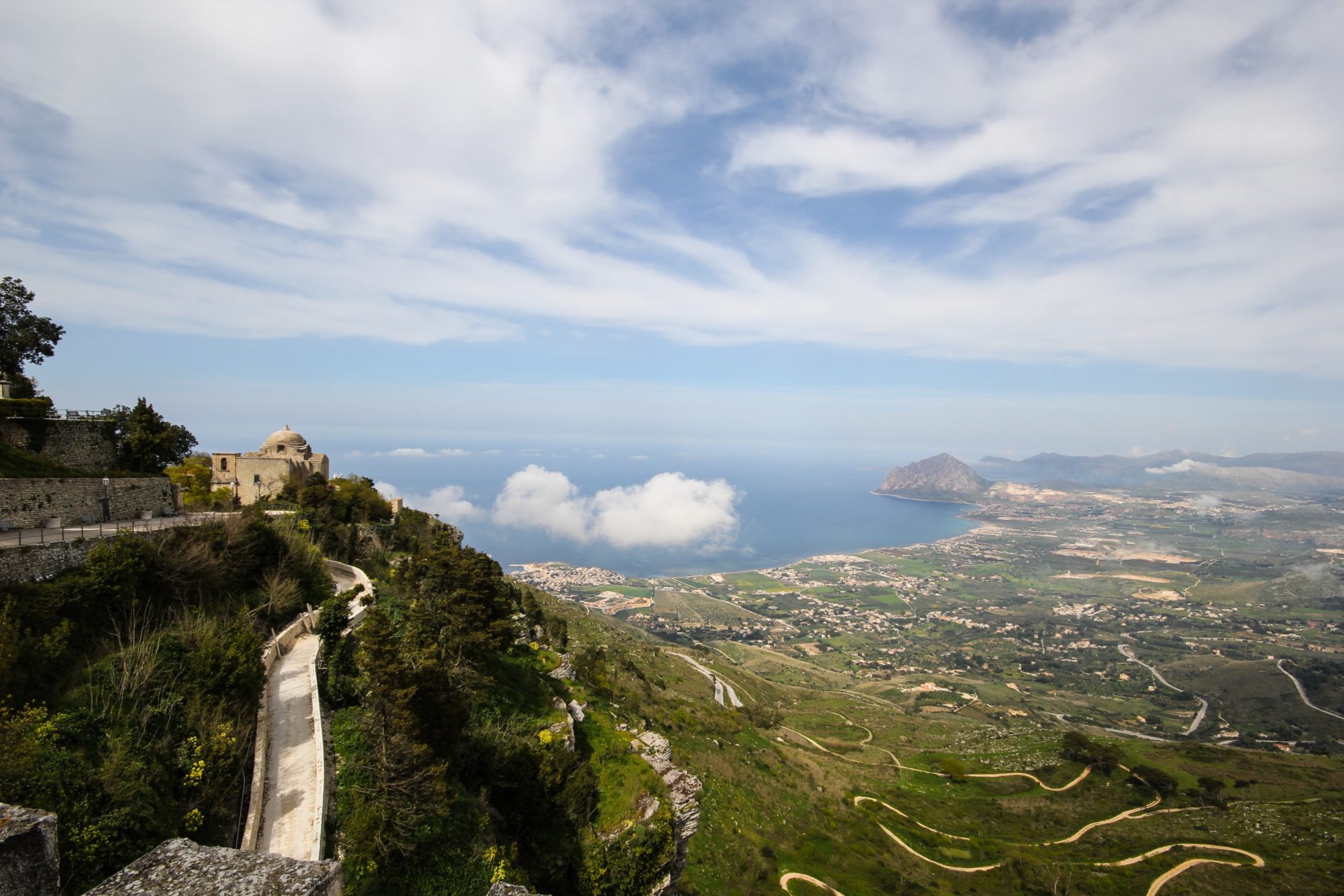 Erice is an ancient medieval village located 751 meters high from the mountain of the same name. As soon as you arrive the inexplicable sensation is that of not being on earth anymore but as if we were hovering in the sky. Erice very close to the sky, very close to dreams, is a place where the clouds are so close that it seems to be able to touch them. The view is breathtaking from every perspective, on one side the Gulf of Trapani and the Egadi Islands, on the other side the valley of Valderice. When the sky is particularly clear you can even see Mazara del Vallo and the islands of Ustica and Pantelleria on the horizon. We recommend you to reach it by cable car to experience the thrill of entering slowly in this enchanted place.

An ancient story between legend and reality.

An ancient Phoenician and Greek city that develops in a maze of cobblestone streets, arches, courtyards, views intact and preserved over time. One of its symbolic places is the Castle of Venus, built on the ruins of a temple dedicated to the cult of the goddess Venus. In ancient times in the temple the Phoenicians worshipped Astarte, the Greeks Aphrodite and the Romans Venus. From here the cult of Venus ericina spread throughout the Mediterranean. A place so close to the sky can only become a place of dreams and love.

The texts that mention Erice are very ancient and have their roots in ancient Greece. Thucydides claimed that it was founded by Trojan exiles, settled on top of the mountain, ancestors of the legendary people of the Elymians. In the Aeneid Virgil says that Aeneas, on his journey away from Troy stopped at Aceste, king of Erice and on the promontory of Pizzolungo would have buried his father Anchises to return a year later in the same place and organize the Ludi, a sports carousel in memory of his father. Erice is the scene of other myths, testifying that it has always been a magical and suggestive place.

Erice and its flavors

Erice and its flavorsThe culinary tradition of Trapani is very well known and appreciated and Erice is no less. Among its narrow streets you will find many restaurants where you can taste the typical dishes of the area as the Cous Cous fish, the Busiate with pesto Trapani, the Cabuccio Trapani. Among the sweets you can’t miss the mustazzoli of Erice and the Genovesi of Erice stuffed with custard, but you can also enjoy the arancine and the cunzato bread, that is bread cooked in a wood oven and seasoned with oil, tomato, anchovies and pecorino cheese.

What to see in Erice

Along its climbs and descents we recommend you to get lost, stop, enjoy its precious views but not forgetting to visit:

Suspended in this magical village with its ancient and fascinating history, you will enjoy a unique atmosphere and one of the most beautiful sunsets in all of Sicily. This small village on the mountain is surrounded by pine forests that make it even more impressive and above all quiet. Erice is the place of calm, of silences, of thoughts.